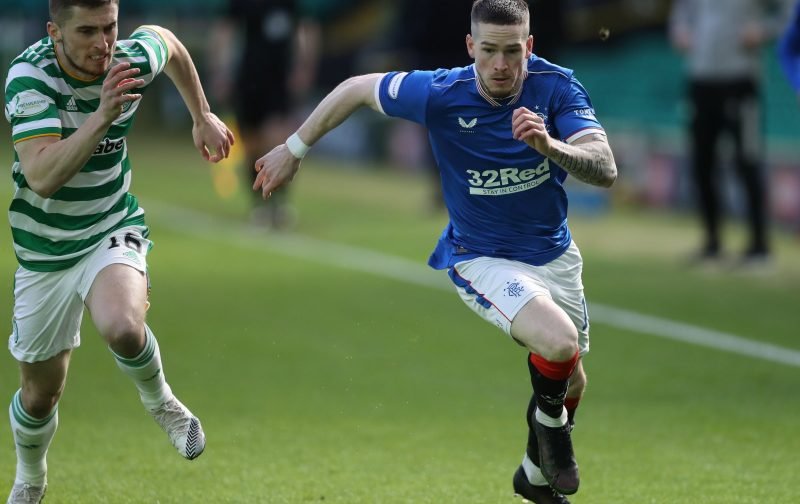 It’s always reassuring when one of you best players, who has been the subject of recent transfer speculation, responds in the best way possible – with an outstanding performance and a commitment to the club.

Ryan Kent – valued at £25million recently – has been linked with a move to Leeds United since last summer when a couple of derisory bids were said to be knocked back and after how he played against Celtic, the Premier League side might have to re-think whether or not the 24-year old is in their price range.

Speaking to Sky Sports after the derby win and reported by Glasgow Live, Kent confirmed that he is loving life at Rangers and it’s clear to see just how much the club means to him:

“It’s just about playing in the now.

“It’s nice to be linked with other big clubs, but you’ve got to understand your duty to where you are.

“I love this place, it’s done so much for me, so as long as I’m here, my mind is solely focused on Rangers.”

There was a time when Kent was classed as a “panic buy“, a player who has tormented Celtic – and in particular Scott Brown – in almost every derby he has played in since he signed and he was at it again on Sunday. Steven Davis and Kemar Roofe may have won respective man of the match awards but Kent was magnificent, the free role that was given to him by Steven Gerrard the perfect opportunity to showcase his full ability.

Moving forwards we will have to sell our best players, it’s just how our transfer model will work, however, this doesn’t mean that we should accept the first offer that comes along, especially with key players like Kent – the scary thing is, he’s only going to get better.