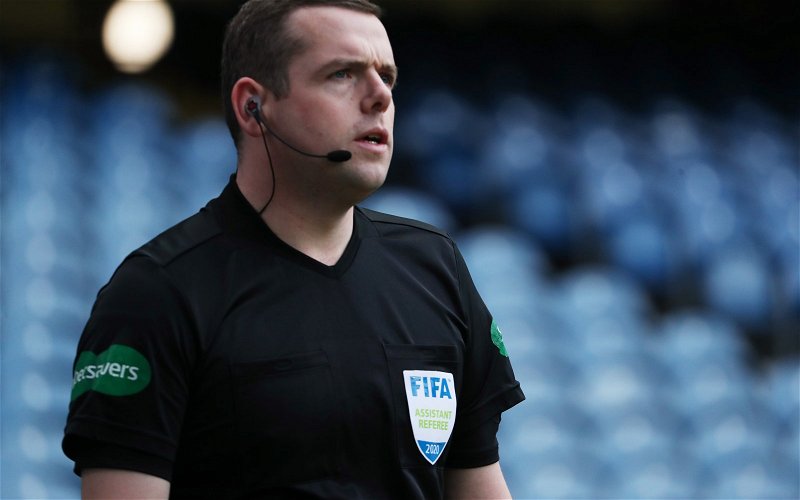 Let’s imagine for a second that the leader of the Conservative party in Scotland decided to guest write for Vital Rangers and used that platform to criticise the Rangers support and indulge in a spot of whataboutery, if the antecedent thoughts of a couple of podders from the Light Blues’ fan base is enough to make front page news, I’d hate to see what effect this would have.

Now, Douglas Ross, as far as I’m aware – nudge, nudge, wink, wink –  isn’t a Rangers fan, he certainly hasn’t done us any favours that I can remember, however, the paranoia from across the city when proclaiming that “Brother” Madden, “Brother” Dallas and co. are all out to get them can be proven to be the worst conspiracy ever and yet, still, it doesn’t stop them.

Bobby Madden “is in the Masonic Lodge & an ex Rangers season ticket holder” & should be banned from reffing Rangers/Celtic games because of the school he went to. 🤣🤣🤣

And they think he CHEATS THEM. pic.twitter.com/19cjyJARcA

So why would a self-confessed, Celtic supporting, MSP write for one of the most infamous and inflammatory blogs going and think that, one day, it won’t come back to bite him – the SNP’s James Dornan penning his thoughts for The Celtic Blog, which under further scrutiny appears more to be like the boy in the playground who pulls girls’ pigtails when really, deep down, they actually fancy them, such is their love of all things Rangers and percentage of content that is based on the establishment club.

Just think, if Ross was to applaud the Rangers support’s connections with unionist values and the club’s tradition of paying tribute to the British armed forces – it would cause carnage – as would remarks suggesting that our songs can be inappropriate but “theirs” can be “much worse”.

Well, that’s exactly what Dornan has done, yes, he has had a – brave – pop at the green brigade but he has also had a thinly veiled dig at our own fan base when attempting to justify the Parkhead songbook:

“The other reason of course is football rivalry. We know these songs anger and irritate our opponents, who have, in my view, their own and in many cases much worse, songs in their own repertoire.”

The worrying thing is that an elected official has decided a partisan blog is the place to offer balanced comment on a very nuanced subject rather than a national newspaper or media outlet, that the MSP involved has had to issue apologies for false accusations in the past to both Club 1872 and a bus company says it all about his ability to maintain objectivity, as does the fact he refused to apologise for the way he handled the 55 celebrations video that had been doctored – for perspective, the site his article appears on has frequently called for investigations into our financial handling, use of caffeine and the way that our games are officiated, a moonhowler’s Mecca.

If Douglas Ross, Murdo Fraser or any other MSP was actually asked to write a guest article for a Rangers blog I’m pretty sure the request wouldn’t even get a response but then again, they don’t have an agenda, a history of making stuff up or a need to project their insecurities onto anyone daft enough to listen.