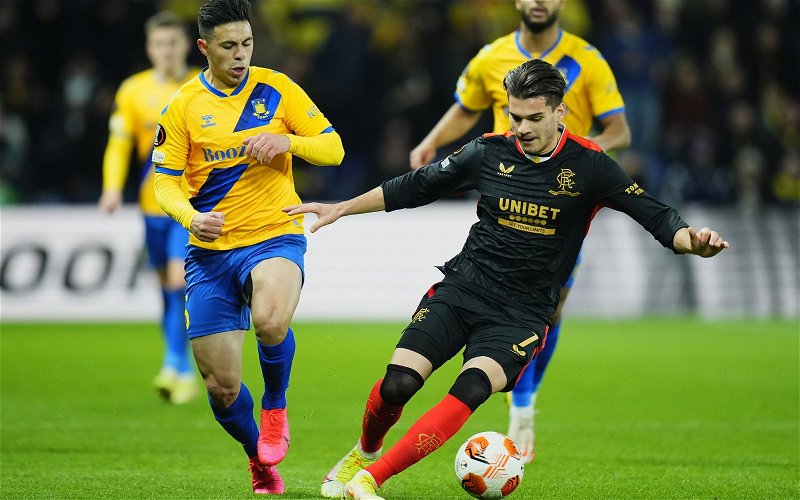 Lyon confirmed their qualification to the Last 16 of the tournament as well as winning the group, regardless of what happens in the last two games. The other factor is that second place is now wide open with the other three sides still in contention to qualify for the Last 32.

It was important that Rangers took a share of the points from the game and that is what happened, thanks to a fine team goal finished in style by Ianis Hagi.

The state of play is now as follows in terms of points gained after four games played:

On Matchday 5, we are set for an absolute cracker at Ibrox with both teams out to win. Recent events against Czech sides will add to the atmosphere even further so it all adds up for a night to remember.

With Rangers having lost 1-0 to Sparta in the reverse fixture, essentially Steven Gerrard’s team need to win this coming game by two goals to get the upper hand on their opponents for qualification.

This is all explained in the Europa League rules, set out by UEFA (Article 16 – equality of points), in determining the qualification process.

A head-to-head result is the decider, based on points and goals between the clubs in contention, before other matters are considered.

Of course, the whole thing is still in Rangers hands with six points to play for, including the last game against an already qualified Lyon side – who may still field a relatively strong team but the competitive edge is lost from their perspective.

Brondby, propping up the group at present, still have a chance but they would need to take six points from their remaining two games – away to Lyon and home to Sparta which appears unrealistic to say the least.

In a nutshell, three points and a win by two goals at Ibrox aganst Sparta should be enough to secure second place but a point in Lyon would make sure of it.

The aim is clear, it’s still in our hands and we are set for a full house against the Czechs on 25th November for a pivotal, campaign defining clash.