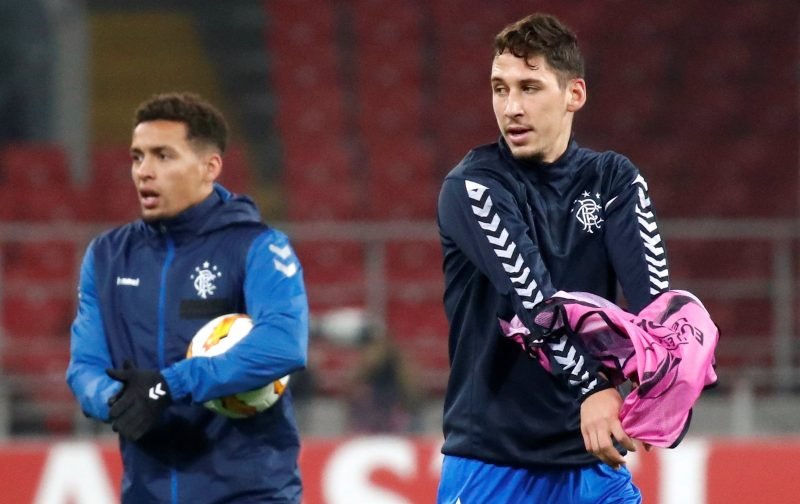 Niko Katic looked confident and comfortable today as he got up close and personal with his new surroundings at Hajduk Split.

The towering central defender returns to his homeland on loan in what is hoped will be a productive and prosperous switch to get essential game time as a regular.

His arrival comes as Mario Vuskovic moves on from the Croatian giants to join Hamburg.

On the Dalmatian coast, Katic will continue to play in front of a passionate demanding crowd, just like in Glasgow.

Led by the fanatical Torcida group, the locals provide a vociferous atmosphere which intensifies when Dinamo Zagreb comes to town for the Eternal Derby.

As the biggest club in Split, the Hajduk colours can be seen all over the city as witnessed in the last week by respected United We Stand (Man Utd fanzine) editor and journalist, Andy Mitten.

In Split, Croatia. Don’t think I’ve seen a city with so many walls decorated in the colours of their main football club.
Hajduk Split were a major force in Yugoslav and European football in the 70s. They also beat Man Utd 6-0 in a 1980 friendly. pic.twitter.com/PMzdAotbg8

On the loan switch, Katic told the Hajduk official website:

“The first impression is really great, I am really pleased that we reached an agreement and that I am becoming part of Hajduk.”

“We quickly agreed, as soon as we found out about the mutual interest, and I was attracted by the fact that Hajduk strives for the highest goals and that it agrees with my character.”

As for Niko’s new colours, we prefer them to Cedric Itten’s…

Best wishes to both players in their loan spells away from Ibrox.