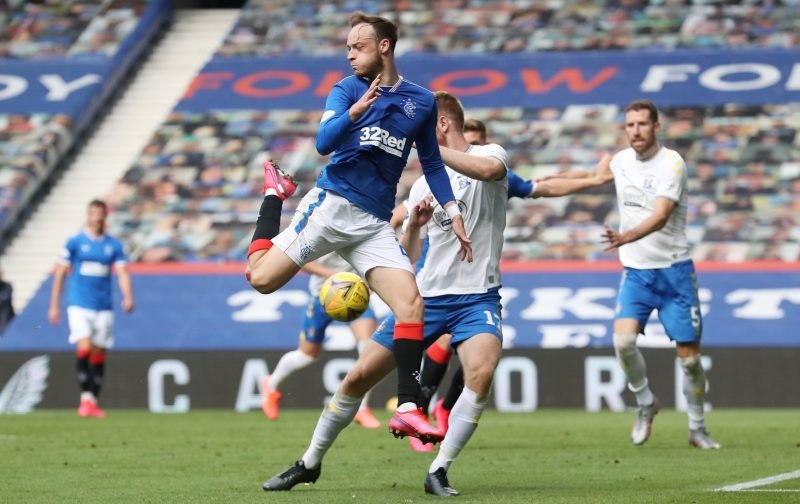 The past weekend was quite a productive one for Rangers players out on loan, with Brandon Barker and Glenn Middleton in particular receiving recognition for their impact on the pitch.

At present, there are several Gers players out on loan – from first team fringe players like those mentioned above to youth players getting their first taste of first team action.

Brandon Barker has now made three appearances scoring one goal for Oxford United.

On Sunday, he delivered the assist for the crucial equaliser in Oxford’s 2-1 home win against Wigan. In the 72nd minute, Barker provided a measured cross onto the head of Sam Winnall, nodding in at the far post.

At St Johnstone, Glenn Middleton had a very decent cameo off the bench in their 1-2 home defeat against Celtic.

Middleton was lively and threatening, playing up front off Stevie May who was another second half sub as the Perth saints strived to salvage a point having taken the lead in the game.

The 21-year old won a few free-kicks and corners for his team in his all action display that will have impressed boss Callum Davidson who stated,

St Johnstone set for strong finish to the season and stats indicate Glenn Middleton will play a big part in it https://t.co/IzWbkqa1o5 pic.twitter.com/seqjRAUP9r

Elsewhere, Jordan Jones was a late sub as he replaced Aiden McGeady in the last 10 minutes of the Black Cats 4-1 home win against Doncaster Rovers.

Stephen Kelly, Kai Kennedy and Josh McPake did not see action at the weekend as their games fell victim to the postponements caused by the deep freeze across the country.