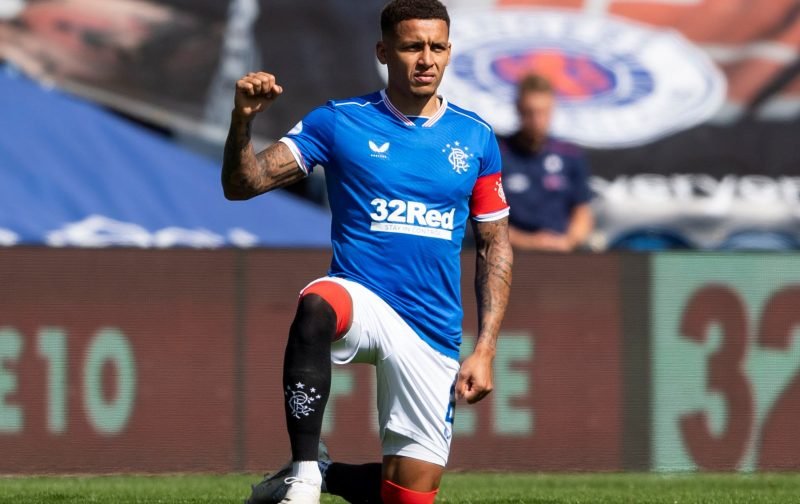 Rangers exit from the Europa League and memories of an incredible campaign have undoubtedly been soured by the events in the closing stages of last night’s 2-0 defeat to Slavia Prague.

The club has subsequently issued a strongly worded statement in which Stewart Robertson details how badly the events have affected the players involved with a series of racist incidents taking place on social media after the game, hoping that it isn’t “swept under the carpet” by UEFA.

In the 90th minute, during the flashpoint that triggered the fall-out, Slavia’s Ondrej Kudela clearly said something to Glen Kamara causing the Gers midfielder to immediately notify the referee that he had been called something racist, footage from Rangers TV clearly picking up the accusation.

Steven Gerrard was visibly raging in his post match press conference and was clearly upset that Kamara was subjected to the alleged abuse, as reported by BBC Sport:

“My player tells me he was racially abused.

“The disappointing thing is that their people are trying to defend their player and calling us liars.

“I feel angry. I know Glen and trust him 100%. The Slavia player has caused this and something needs to happen quickly but that is above me. But whatever happens, I stand next to Glen.

“I don’t even feel like talking about football just now. It’s over to Uefa now and I just hope it doesn’t get pushed under the carpet.”

Disappointingly, Slavia Prague have come out with a fanciful statement, via The Scotsman, and tried to justify the behaviour of their player by criticising the number of fouls that Rangers gave away during the game and because of the injury caused to their keeper by Kemar Roofe’s accidental – but dangerous – red card challenge.

They also claimed that Kudela was assaulted and that Gerrard and a UEFA delegate saw the incident, Police Scotland subsequently confirming that no such allegations have been made:

“After one of the brutal fouls, Ondřej Kúdela spoke to one of the Rangers players.

“I told him ‘You ******* guy’. It was said in emotions, but I absolutely deny there was anything racist in those words,” Kúdela stated.”

The “brutal” foul they speak of was a player falling over the ball that Kamara had nothing to do with, there was no emotion, it wasn’t a reaction, Kudela was clearly calm and measured as he spoke to him.

As Vital Rangers reported, when Police Scotland refute the allegations that Slavia made, it calls into question the club’s whole honesty and integrity surrounding the disgusting affair.

That UEFA have yet to comment on the incident but instead have referred to something else in the tunnel where Prague claim that Kudela was assaulted despite them “not allowed to enter the dressing room“, says it all.

“UEFA is aware of an incident which occurred in the tunnel after the end of the match and which involved some players of both teams.

“We are waiting to receive detailed reports of the match officials who were present at the game before commenting further.”

It’s in the hands of the governing body, this won’t be the last we hear of it but don’t hold your breath on any punishments being handed out.