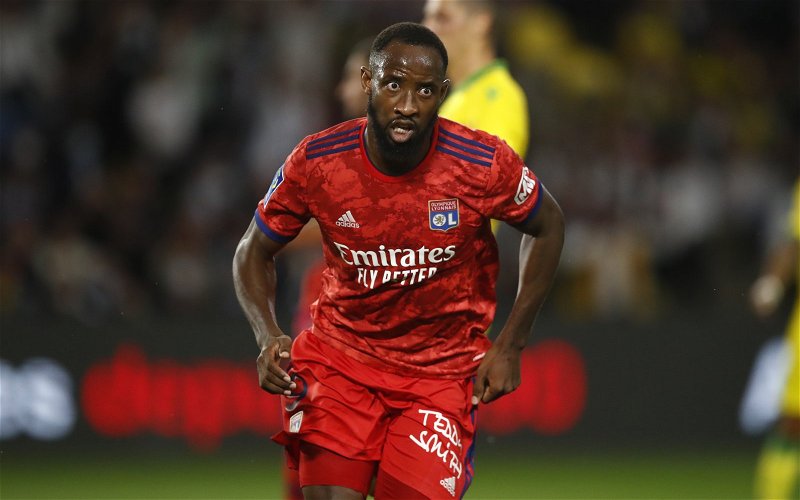 Rangers prospects for Thursday evening appear to have increased with reports of a massive double blow for Lyon ahead of the Europa League Group A opener at Ibrox.

French outlet Radio Scoop, who appeared on the advertising hoardings at the Groupama Arena on Sunday evening, has claimed that the pair will not make the trip to Glasgow for different reasons.

An injury is said to have provided a setback for the former Celtic striker Moussa Dembele whilst Xherdan Shaqiri, signed from Liverpool last month, will be absent from Lyon’s squad as he has only received one Covid jag, according to Scoop:

“The centre forward (Dembele) is in great shape having scored 4 goals in the last 3 games, but due to muscular discomfort will be absent for the meeting in Glasgow, this Thursday evening and certainly for the trip to the Parc des Princes, to challenge PSG, on Sunday in the league.”

“As revealed by L’Equipe, Shaqiri will not be able to travel to Scotland as he has not completed his vaccination course.”

Make no mistake about it, these two players are vital components of this current Lyon side and their absence will be felt.

That said, they will be replaced by relative, requisite quality in what will be one of the toughest games in Europe of the Steven Gerrard era.

Some spice will be lost with no Dembele at Ibrox, given that the former Parkhead man would have received a less than welcoming reception – especially as he continues to revel in his past glories and goals against Rangers and the likes of Rob Kiernan and Phillipe Senderos, during the reign of Mark Warburton.

Following on from the hard-fought win at St Johnstone, the Gers will need to raise the level of their play to match the technique and application of their visitors on Thursday.

Gerrard’s team will also have a couple of key players missing so we are set for an intriguing encounter on the pitch.

Over the last few years, this Rangers team have revelled under the bright Ibrox lights in the Europa League and Lyon will provide another stiff test in what is overall, an excellent backdrop to kick-off another group stage campaign.