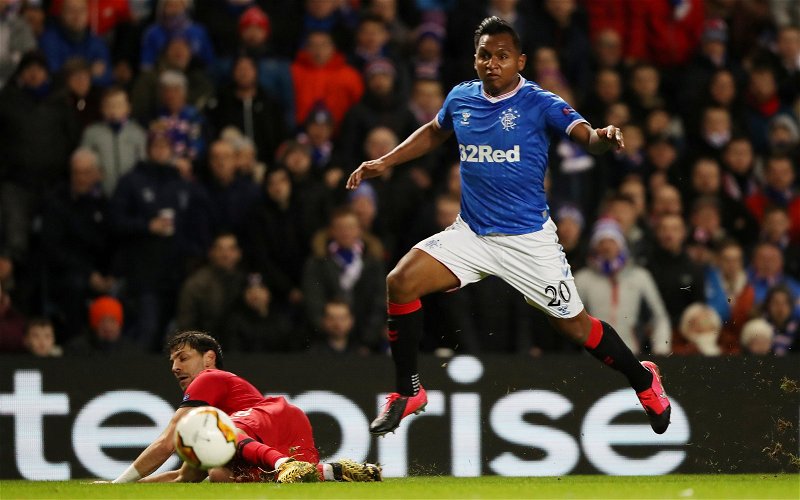 The enigma that is Alfredo Morelos is far from a conventional player or character as we know all too well by now.

What is wrong with Morelos? Simple, he is’nt in form and playing anywhere near his best. Fixing the matter is a different equation.

In a typical bold fashion, he posted a picture to his Instagram account story yesterday, suggesting that he will do the talking and sending a message about the current noise directed his way.

He is free to express himself as he wishes but he needs to deliver on the pitch.

Morelos has to answer his critics on the pitch where it matters. https://t.co/bWQees10Nz pic.twitter.com/ebO0ZxP2Rh

After the international break without a call-up to the Colombia squad, it was envisaged that the Rangers hitman would be fresh and hungry, ready to lead the line against Hearts.

Unfortunately, it was an out of sorts, ineffective performance that was produced, compounded by a terrible miss that would have wrapped the game up for the champions. Over the course of the game, El Bufalo had several very good channces to score but couldn’t take any of them.

His manager wants more quality and has backed his man to find the focus and levels to get back near his best.

“He must have had four or five. We need to maybe sharpen him up and get him to that next level and I’m sure the goals will come.”

Alfredo Morelos; best work has often come on the Europa League stage, under the lights at Ibrox.

That could well be the catalyst for a turn of form in what is a crucual period for the Gers – that is if the manager decides to keep faith in the Colombian with Kemar Roofe and Fashion Sakala also in contention.

It has been said that Morelos has suffered with a softening of his general play and without that edge, often a tightrope, much of his threat and conviction is lost.

There is some merit to the argument but time and again, the Colombian has proved his doubters wrong. Dips of form have came and went previously and this THursday against Brondby presents a fantastic chance for the man from Cerete to put in a big performance and hopefully to get back amongst the goals and in the process, join the 100 club at Ibrox.