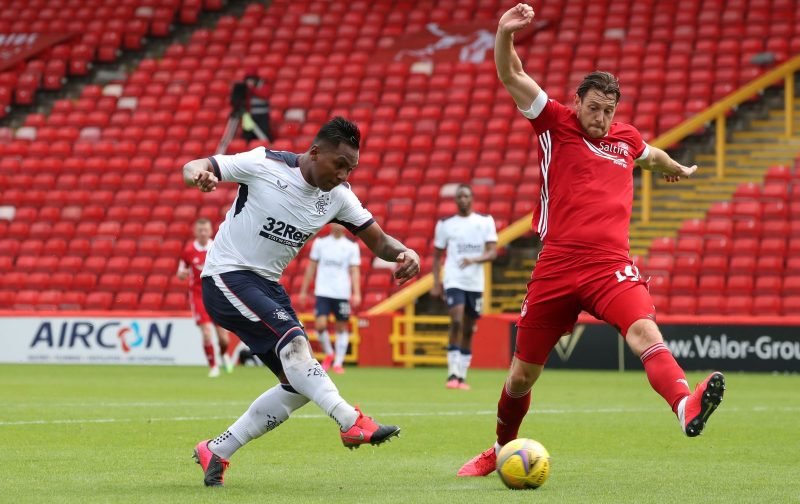 This afternoon, Rangers made it 15 consecutive Premiership league wins on the spin with a worthy 1-2 victory at Aberdeen.

A brace from Alfredo Morelos made the difference with Matty Kennedy pulling a goal back for the Dons in the second half.

The hosts went down to 10 men on the 26th minute mark after Ryan Hedges denied a clear and obvious goal scoring opportunity for Morelos.

That man Morelos looks like he is getting back to his instinctive best and he will be aiming to stay on the goal trail to fire Rangers to the Premiership title.

“His performances have not been up to standards he sets himself but there were signs he was back to his best. It wasn’t his top form, but he was getting back to what he was last season.”

Gers team mate Steven Davis was full of praise for the man known as El Bufalo,

“I thought Morelos was excellent. He looked back to his best, picking up some really good spaces in between the lines. Obviously, a couple of good finishes so I’m delighted for him. Hopefully that’s a sign of things to come from him as well.”

The Gers camp is a very happy one, yet the mood is measured as the wins keep on coming, to pile the pressure on second place Celtic.

Here is a selection of the reaction from Rangers Twitter today,

Huge win, we go one game at a time but the pressure we are mounting on them is monumental. 15 league wins in a row and Alfie back in form 🐃

Massive victory for Gerrard's side as they make it 15 wins on the spin to go 22 points clear.

Their best football in weeks for the first hour. After the red it should have been a procession but it was a nervier last 20 than they'd have liked.

That's a magnificent interview from Gerrard. We win a crucial game and he isn't happy and tells the players about it. That's superb honesty.

I await people demanding we are docked points because he spoke a few words with his facemask not covering his nose.

Well, I lined my long johns that last ten, BUT:

Fine to see Morelos back on the scoresheet the day, and another fine 3 points on the board! Happy sunday🇬🇧 pic.twitter.com/aZSocxEf0c