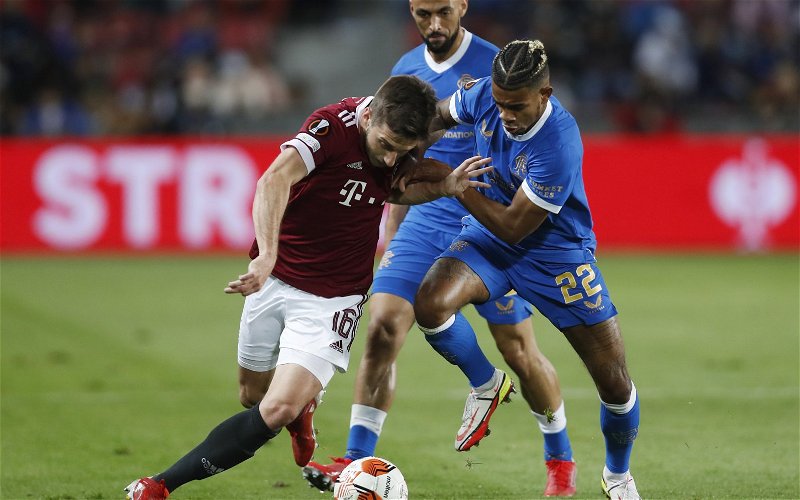 In the second half on Saturday, there was a minor flashpoint on the touchline involving Rangers Juninho Bacuna.

After Connor Goldson had scooped the ball up the pitch, there was a tangle with Hearts’ Stephen Kingsley that resulted in yellow cards for the pair.

Jambos boss Robbie Neilson was not happy at all with the decision and felt that the Rangers man should have been given his marching orders – so much so that he took his protests too far in the eyes of referee Don Robertson who sent him off from the bench, up into the stand.

The truth is that both players were as culpable as each other and speaking on Sky Sports News, former Premier League official Dermot Gallagher backed up that line of thought.

Raised hands and handbags just about summed up the incident as can be viewed below.

“It’s difficult because both players were aggressive toward each other”, stated Gallagher

“I think the referee has got the balance right, there.”

A further sting in the tail followed for Rangers with Hearts late equaliser landing a sucker punch following a costly error from Allan McGregor.

Some criticism came the way of Bacuna, who was replacement on the hour mark for the ineffective Scott Wright.

Whilst he may not be firing on all cylinders, the former Huddersfield man has already shown and again exemplified against Hearts that he is an effective passer of the ball.

It was his release that sent fellow sub Kemar Roofe through one-on-one against Craig Gordon but the goal bound effort struck the post.

Bacuna’s game ould do with some more purpose and to be more direct at times, but it is still early days for the Curacao international who will have apart to play and it is up to him to make the most of his opportunities over the coming weeks.