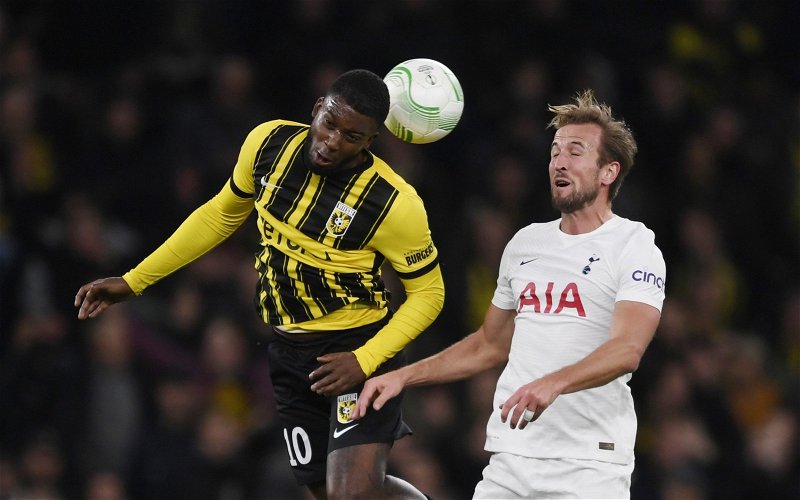 Riechedly Bazoer is a name that a lot of fans are talking about when it comes to potential defensive reinforcements for Rangers next season.

Despite that, his qualities were evidenced as a ball playing centre-half, in the typical Dutch mould, alongside another player to have been linked with Rangers in the recent past, Danilho Doekhi.

An intriguing situation is emerging at Vitesse with both Bazoer and Doehki available to enter Bosman discussions with interested clubs in January, as things stand now.

Given the ongoing Connor Goldson saga at Ibrox, with the Englishman not likely to remain in Glasgow next season, it appears inevitable that a major signing will be required to bolster the back line at Ibrox and Bazoer could fit the bill.

His performance at Spurs new state of the art stadium comes just as he was named in the Eredivisie team of the month for October.

Previously, VitalRangers pondered the merits of Bazoer at Ibrox but this also came with a sting as the player is said to have a questionable attitude.

“Bazoer is playing on a way too low level, but his attitude is a big problem.”

“He has a problem with authority and if he doesn’t agree with solutions or instructions, he will also react to being tackled a lot, he will react emotionally and has been outed from the 1st team squad on several occasions.”

That may well be red flag for Steven Gerrard and the Rangers staff but the player is a definite quality asset who they will be watching and monitoring with January and beyond in mind.

A fair few clubs should be looking at Bazoer from Vitesse.

Top talent a few years ago, and found his way to Vitesse.

He's having some game tonight, real quality on the ball. #UECL

I just say I thought Bazoer was outstanding. Without him, Vitesse have absolutely nothing on the ball and are 5-10 yards deeper and the game is in complete control for Spurs. He must have played that curled right footed Dijk out towards the left at least 6 times today