We managed to predict the line-up for the now irrelevant Scottish Cup win over Celtic but this Old Firm fixture could be a bit harder to nail down.

Rangers could be without a host of senior and fringe players meaning that we are in line to see a derby debut in defence and a first start in the forward line.

It’s not been a great week for Steven Gerrard, two 1-1 draws with St Johnstone point to a need to freshen things up in attack, as much as anything caused by the limitations we have in midfield but this is the team I think we should go with to continue our unbeaten league campaign and make it four Old Firm games without defeat this season: 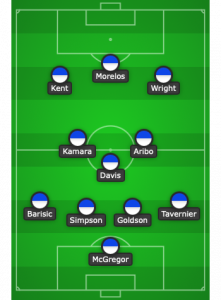 Jack Simpson hasn’t had the greatest of starts as a Rangers player, he’s yet to look fully comfortable alongside Connor Goldson, however, it is early stages and he hasn’t exactly played a lot of football this season but, Odsonne Edouard and Mohamed Elyounoussi have caused better defenders than him problems in the past so he will need to be on his toes from the first whistle, or it could be a long 90 minutes.

The midfield almost picks itself. With Scott Arfield injured, Ryan Jack out for the season and Bongani Zungu suspended, we have to go with the players that are left which means that Joe Aribo will continue in a deeper role alongside Steven Davis and Glen Kamara.

This, for me, leaves one space in attack in support of Ryan Kent and Alfredo Morelos and, on form, it has to go to Scott Wright. Ianis Hagi and Kemar Roofe have been key players for us throughout the successful league campaign but neither of them are at their best for one reason or another.

Give Wright his chance and with him and Kent having the freedom of Ibrox, we could cause them all sorts of problems, let Alfredo Morelos deal with the centre-halves, it’s what he does best.

It’s the only thing left to play for this season – the unbeaten league run – I’d expect us to start with more intensity than we have in recent derbies and certainly more than we have in our last two games, the first goal is always important but I get a feeling that in this one it could decide the outcome of the whole game.