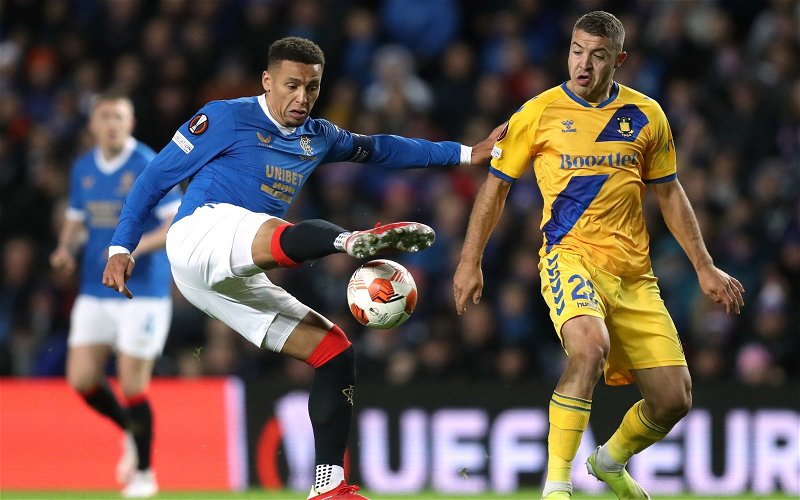 As long as Nathan Patterson continues to shine on the international stage and the Rangers defence continues to creek, there will always be calls for him to be drafted into the starting XI at the expense of James Tavernier.

Now, with three goals and 11 assists in 20 appearances, the skipper isn’t exactly having a bad season, however, we are conceding too many silly goals and, unfortunately, Tavernier has been involved in a few of him – question marks for his part in the first two goals for Hibs refusing to go away.

Any other position on the park and we would probably see Patterson getting drafted in but it would be a huge surprise to see Giovanni van Bronckhorst drop his captain immediately, it’s hardly the best way to unit an under pressure dressing room in your first week in charge.

This hasn’t stopped fans from calling for I’m to start against Sparta Prague though after they were reminded of his exploits against Royal Antwerp last season:

Hope this is a sign he’s starting on Thurs. jack is the new captain 😁

What does Patterson need to do to get a game ? He is Miles ahead of that dud captain no show!

More Nathan Patterson in my team please. Thanks Mr. Rangers.

Get this boy starting on Thursday

Start him on Thursday please Gio 🙏

It’s a tough call to make and one that isn’t just as simple as dropping Tavernier, there’s no denying that he has been involved in some of the goals we’ve lost but he’s also been one of the main driving forces behind getting us back into games, there have been previous claims from the management team about trying to get them both into the side but that wouldn’t fit with Van Bronckhorst’s usual formation – we’ll find out at around quarter to seven on Thursday night just how tough Gio is going to be and if these fans are going to get their way.