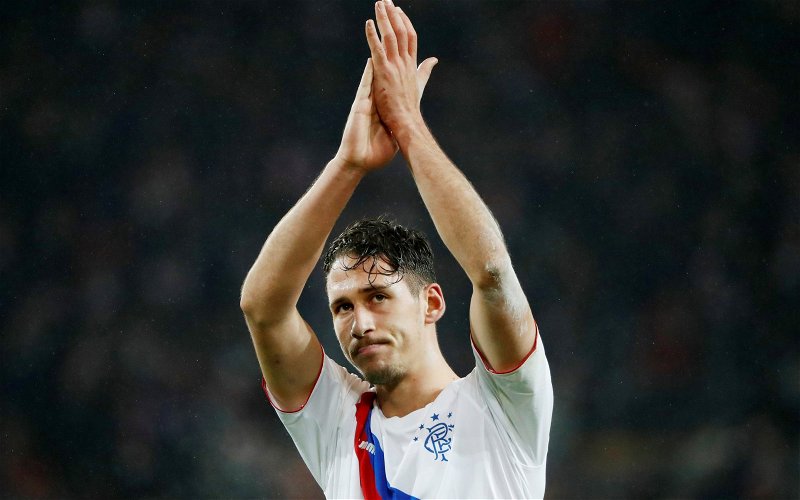 Much of Rangers recruitment this summer will depend on who is and who isn’t leaving, those who’s contracts are expiring and those who have a year left to run, the unpredictable nature of the transfer market will also, probably, throw up a couple of surprises.

One area where we could see little, or a lot of movement, is in the centre of defence depending on what Connor Goldson decides, if any offers come in for Calvin Bassey and if Leon Balogun is offered the chance to stay. There is also the small matter of Niko Katic returning to the club where, it looks as if he has been told he has a chance to resurrect his Rangers career, as reported by Football Scotland:

“Giovanni van Bronckorst is set to hand Niko Katic a Rangers lifeline by giving him the chance to prove himself in pre-season.

“The Croatian defender is entering the last year of his contract and is currently out on loan in his homeland with Hajduk Split, who do have an option to buy.

“Katic wants to stay with Rangers anyway and it’s believed he would have turned down a permanent move before he gave himself one last chance in Glasgow.

“And we can exclusively reveal his patience is set to be rewarded with van Bronckhorst to test him in pre-season and allow him to show what he can do before making a decision on his future later in the summer.”

At his best, Katic is a solid, no nonsense defender, however, we have that in Bassey now, not only that but both Filip Helander and Leon Balogun were signed to play as the partner to Goldson, the Croatian isn’t the type of player that can spray passes about and dictate play.

Ironically, if he hadn’t gone out on loan he probably would have seen plenty of game time because of injuries to Balogun and Helander this season, Bassey being the one who benefited the most from that situation, but the loan spell to Hadjuk Split will have done Katic the world of good after missing a full season following major knee surgery.

Gio is doing the right thing by having a look at the fan favourite but even Leon King must be ahead of Katic in the queue now, he might not be as strong in the air yet but his ability on the ball is certainly more useful for the way we play.

Hadjuk are unlikely to take up the £3million option to buy that was agreed but we should easily be able to turn a profit on a player who, in the right team, would be a solid acquisition, he just isn’t as good as what we already have or what we need.