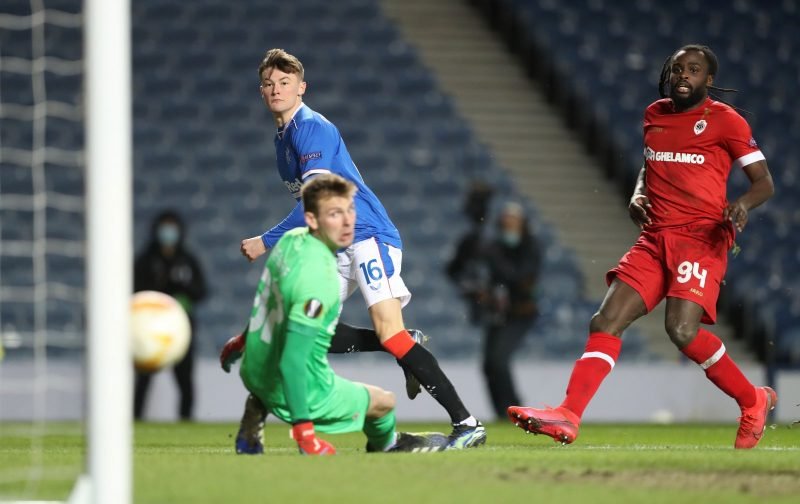 With every game he plays Nathan Patterson looks every inch a Rangers player destined to wear the famous Light Blue jersey for years to come.

Unfortunately, as we have seen across the city with Kieran Tierney, sometimes it doesn’t work out like that and when a player is developed from the academy to the first-team, being able to turn an eight-figure profit is hard to turn down.

We are – hopefully – a few years away from the day when we have to sell Patterson and after his display against Cove Rangers, he showed once again why he is rated so highly at Ibrox.

Steven Gerrard didn’t hold back after the game when discussing the club’s appeal over Patterson’s four game ban handed out by the SFA, as reported by BBC Sport:

“We don’t think everything has been taken into consideration when you are talking about the boys in terms of age and how damaging it could be for them in their careers moving forward now.

“You’re talking about one of the brightest prospects ever in terms of right-back. This kid is going to go and play for Scotland and all of a sudden the SFA wants to ban him for that long. I don’t get it.”

The obvious issue with Patterson is that he has had to wait for the skipper and one of Rangers best players to get injured before he really got a chance to show what he can do, that he was trusted to come on for Leon Balogun in the Europa League against Royal Antwerp is a perfectly example of the faith that Gerrard has in the 19-year old.

He is – and I’ll argue all day long with anyone who suggests otherwise – Scotland’s best right-back and it is only a matter of time before he makes the position his own. But he has to be playing games.

For me, he is too good to be going out on loan and it would be a waste of money to sign another right-back purely as a back-up, Gerrard has to move away from the policy of playing James Tavernier in every game next season regardless of his status at the club, we know that Patterson can be trusted and if the captain does decide to extend his contract he must be content with knowing that he will play a major part in the development of the finest academy product since Barry Ferguson.