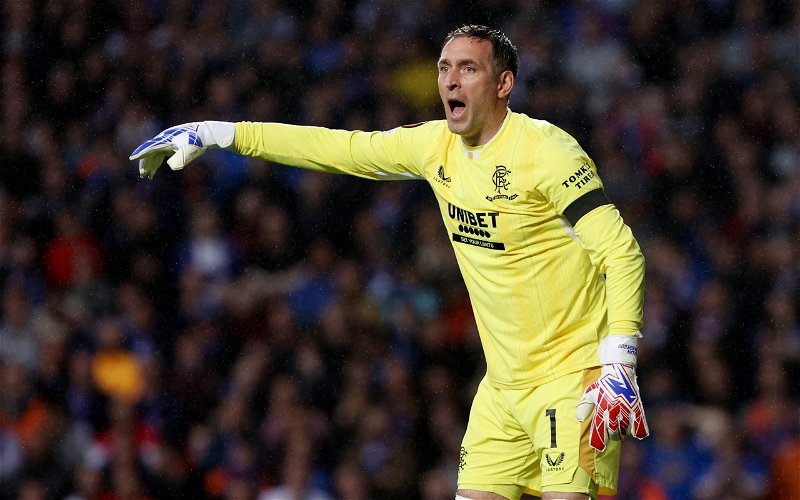 Rangers confirmed on Monday afternoon that Allan McGregor has signed a new 1 year contract at the club.

The update means that the veteran goalkeeper will be a player at Ibrox beyond his 41st birthday in January but it would be accurate to say that the initial response from the fans has been a relatively cold one.

Mixed form and regular mistakes from McGregor which cost crucial league points last season are still very fresh in the mind, as is his reluctance to deal with crosses into the boxes – something that is part of Jon McLaughlin’s game.

Yes, McGregor contributed plenty to the Europa League effort last term but what is the message and reasoning for persisting with a 40-year old keeper whose best days are now in the past? Whilst he is undoubtedly a club legend, the criticism and questioning is also valid and this talking point won’t be going away anytime soon.

With the announcement, came the usual soundbites and lines from the club, this time the manager Giovanni van Bronckhorst and goalkeeping coach, Colin Stewart were quoted.

The words attributed to GvB included:

“Allan brings us invaluable experience and leadership both on and off the pitch, and I am really pleased he has chosen to stay with us for another year.”

“I have been really impressed with the positive influence he has on our players, and also the dedication he has shown to still be a valuable asset for us in a playing-sense at the age of 40.”

Is is clear that in order to push on to the next level as well as to regain the Scottish Premiership title, further quality is needed in the Rangers team including an injection of freshness. So far this re-signing has followed those of Connor Goldson, Steven Davis and Scott Arfield. That is OK in terms of stability and continuity, with more time for the necessary additions to come. That is an imperative over the next month.

However, specifically for the keeper situation, big questions remain to be answered and fully explained, the initial quotes don’t even touch the surface. What will McGregor’s role be, is he going to be back up to McLaughlin? If so, will Robby McCrorie be cut free? What is the strategy and logic to continue with McGregor given all of the above?

This decision provides an element of risk, division and weakness where it didn’t need to materialise. We can all just hope that this isn’t an agreement later regretted by both player and club. The warning signs have been very clear.