It’s not quite a full house, it’s not even flag day, but it won’t make it any less exciting when Steven Gerrard’s Scottish champions run out to the acclaim of a (semi) packed Ibrox to take on Livingston in game one of 38 of what is sure to be an eventful Premiership campaign.

The gaffer has a few issues to sort out with regards to his selection, and foremost in his thoughts will be whether or not to go with the team that is likely to be tasked with taking on Malmo during the week.

In terms of absentees, Alfredo Morelos is still in quarantine, Ryan Jack is just about to return to contact training and Joe Aribo has missed the last couple of friendlies but, other than that, we have are a very near to full strength.

The trio of Leon Balogun, Glen Kamara and Kemar Roofe are suspended for two, three and four Champions League games respectively so there is a strong likelihood of them starting in the domestic fixtures either side of the games against Malmo.

With this in mind, this is the XI I think Gerrard will send out to get season 2021/22 off and running: 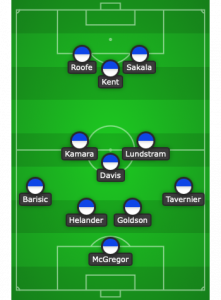 If Filip Helander had returned earlier, I probably would have gone with Balogun but the Swedish international didn’t feature until the Real Madrid game and needs to get up to speed, especially with the prospect of facing his boyhood club on the horizon, he will be dying to impress.

Midfield is a little harder to call but I’d expect us to go with our strongest set-up before making changes later in the game, it’s likely to be a more physical battle so Ianis Hagi is unlikely to continue in his deeper role despite impressing there recently.

The choice upfront is to either go with the three that will start against Malmo or play Ryan Kent, Kemar Roofe and one other, it’s a difficult one but I think Cedric Itten could be the one that misses out even though he was our top goalscorer in pre-season with Fashion Sakala getting the chance to impress.

It’s not going to be easy, opening day never is, all that matters is three points then attentions can be turned to bigger and more wealthy matters.