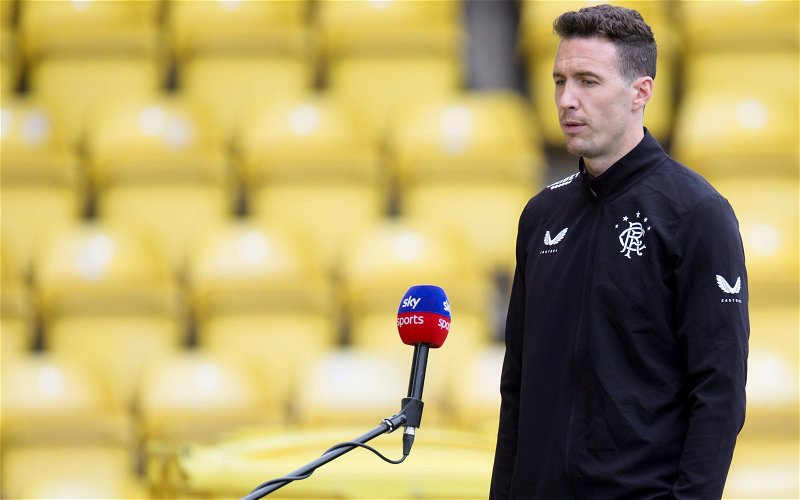 Rangers find themselves in the same position that Celtic did in the summer of 2019.

Two senior goalkeepers approaching the end of their contracts with an obvious option staring them right in the face –  hopefully we won’t make the same mistake.

They are now on their fourth keeper after Craig Gordon and Fraser Forster departed Parkhead and for all that Allan McGregor might not want to continue playing after he turns 40, in Jon McLaughlin we have an understudy who has gradually been playing a bigger role at the club, a factor that former Premier League keeper, Paddy Kenny, feels should see the Scotland cap offered a new deal, as told to Football Insider:

“He could absolutely be in for a new deal.

“He’s had an unbelievable start to the year. The more involved he is, the more likely they are to give him a new contract.

“Him and McGregor have played a similar amount of games. If that continues, I’m sure they’ll be looking to tie that area up and give him a bit of stability.

“He doesn’t want to be playing regularly but not knowing where he stands. Who does that benefit?

“So it would be better for everyone if they got that one sorted out soon, maybe even before January.“

Kenny is right, McLaughlin has never let Rangers down in any of his appearances for the club and has a ridiculous clean sheet record, taking a punt on a new keeper is a gamble that doesn’t need to be taken especially with Robby McCrorie proving against Alashkert and Celtic that he also can be relied upon.

Hopefully letting him play more minutes this season shows that Steven Gerrard has faith in his number two stopper and will make his decision easier, although I’d be happier if things were tied up before he can speak to other clubs – given his form for Rangers, he won’t be short of offers.