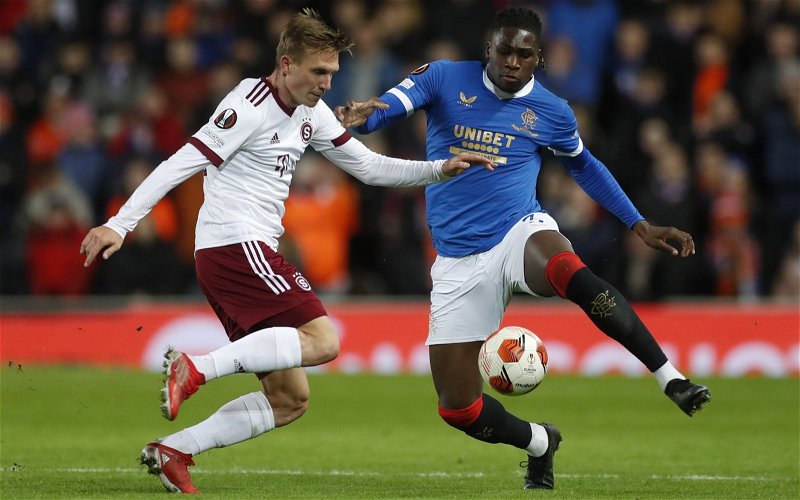 Calvin Bassey already has a large fan base, his positive attitude and work rate make it impossible not to like him – there is also the small matter of him growing in confidence every time he pulls on a Light Blue shirt.

Since Giovanni van Bronckhorst came to Ibrox he has played Bassey at centre-half, a position that, as he revealed after keeping a clean sheet against Sparta Prague, is one that he is unfamiliar with:

“That was my first start at home, so it was amazing. The fans are incredible in every single game.

“But it was great to get a big victory on a European night.

“Obviously I prefer left back but wherever the manager wants to play me, in goal or up top, I’m going to do my best for him.

“Just wherever. I’m ready to play wherever. Preference or not, I’ll give everything I have.”

He does though have all the attributes needed to make a success of the role, deputising for Leon Balogun and Filip Helander has shown that he can be trusted and should be considered before Jack Simpson when you compare their performances in the position.

It’s mad to think that he only made his first start at home against Sparta and that the 31 appearances he has made for Rangers are the only ones that he has made in his senior career, he has an incredibly high ceiling when it comes to his potential given his very obvious physical qualities and how comfortable he is in possession.

His future might yet be at left-back if Borna Barisic leaves, however, in adversity, we may have discovered a hidden gem and a genuine long-term prospect for the heart of defence, wherever he plays though, you can guarantee his smile will be just as big.