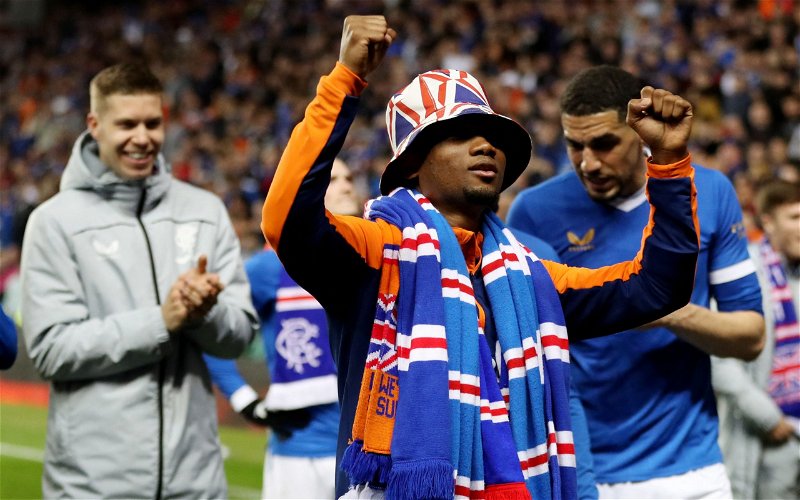 One interesting aspect to the end of the 2021/22 season was the way in which Amad Diallo finally seemed to realise what was needed to make a more telling contribution in a Rangers shirt, accepting that getting clattered by hammer throwing opponents was part and parcel of the game in Scotland.

Such was his form, two goals in five games post-split, and some decent performances where he created chances and was causing opposition defenders problems, that there have been calls from within the Rangers support to bring the 19-year old Ivory Coast international back for another 12-months.

The time it took him to settle certainly delayed his impact, however, he left Rangers looking like he truly got what was required and, speaking to Football Insider, Alan Hutton has echoed the sentiments of the support in that he feels a return to Ibrox could be a good move for all parties concerned:

“I don’t think he reached the heights that a lot of people were expecting.

“I’m not going to lie I thought he’d have more of an impact, so I did feel for him.

“He’s obviously come from a big club, and there’s no doubting his talent and we did see it in flashes – I think Ross County away was his first game if memory serves me correct he scored and had some good touches..

“But after that he got thrown into the deep end a little bit against Celtic and he got lost. I don’t think he maybe realised how big a fixture it was.

“I did feel for him because there is a great player there, it’s just about showing it on a consistent basis and I don’t think we quite saw that for someone so young.

“So it would be nice to see him come back and flourish and show the player he actually can be.”

Diallo was nominated for the Golden Boy award in the summer, there’s no doubt that he has talent and could go on to have a very successful career but I’m not quite sure how he made it on to such an exclusive list, if anything, Alex Lowry would have been more deserving of a place and the same should be applied to our squad for next season.

The right-wing position is a problem for Giovanni van Bronckhorst though in that it is one that has never had anyone nail down a regular place, at the last count; Scott Arfield, Joe Aribo, Scott Wright, Ianis Hagi, Fashion Sakala and Kemar Roofe have all played there in the last six-months alone.

A permanent signing like Ola Solbakken would be perfect in that he ticks all the boxes and has the quality to instantly upgrade the first XI, a move for Diallo would be a safe bet but not one that most fans would either understand or want.