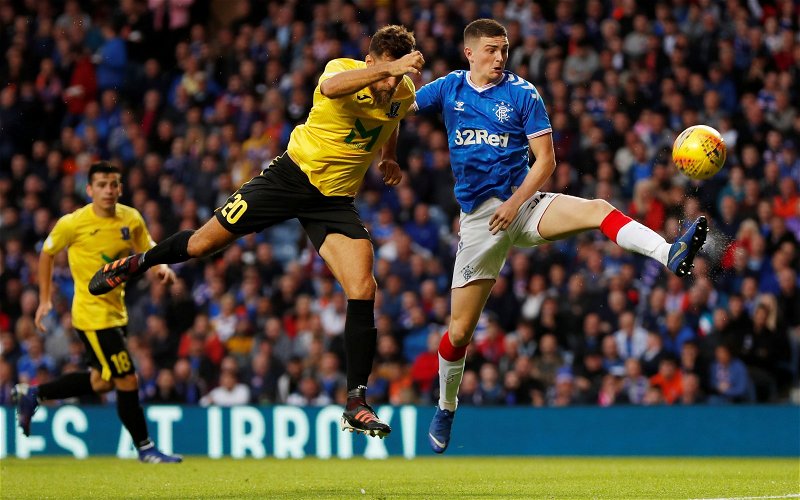 Now managed by Paul Hartley, Hartlepool are said to be giving the 24-year old another chance which he will need to grab with both hands to get his career back on track.

It is a level that Hastie should be able to acclimatise to, but over the last season he disappointed in spells with Partick Thistle, then failed to make an impact at Linfield as David Healy’s side went on to win the Northern Irish Premiership.

His first loan away from Ibrox got off to a good start when sent to then-League One Rotherham. Three goals quickly followed but that would be as good as it got before he was recalled at the turn of the year. For 20/21, a return to Motherwell for the full season didn’t really produce a spark leading to the current downturn. It is clear how much this latest move needs to work out for the player.

As well as the Gers, Hartley is also taking his new team to Portugal for a pre-season camp which should see Hastie as part of the travelling squad, as reported by the Hartlepool Mail:

“Hastie can operate on either wing and is said to be close to a deal with Pools with several reports in Scotland, suggesting the Rangers winger is set to end his time at Ibrox.”

“Pools boss Hartley recently told The Mail he was confident there would be a number of new arrivals before the squad heads out to Portugal next week for their warm weather training camp.”

Hartlepool, who are also said to be interested in Josh McPake, have offered Hastie a permanent deal so some form of severance agreement will be required from Rangers given that a four year deal was signed back in 2019.

It is very clear that the move has failed, with no impact whatsoever made at Ibrox. The shirt, expectation, size and scale of the club just isn’t right for some players and for Jake Hastie it appears that making the attractive move to Glasgow under Steven Gerrard was the wrong option for his career, just as he was progressing so well at Fir Park.

Hindsight is a wonderful thing, but all that matters now for the player is that he finds some stability and form to push on to make a career for himself at a decent level. That is imperative.