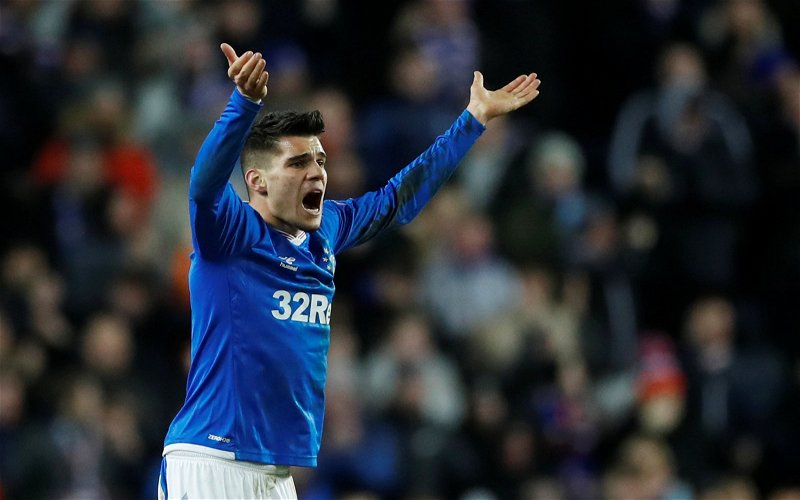 Ryan Jack’s long awaited return to action was warmly received off the pitch, but even more so, the reaction by some of his fellow players would have brought a tear to a glass eye.

The midfielder has been out of action for around nine months following extensive surgery to his spine to relieve a problem with his calf muscles that would flare up unannounced and disappear just as quickly but has now been training pain free for the last couple of weeks.

As Jack was about to come on Joe Aribo started applauding but then Ianis Hagi took things a step further by cajoling the crowd into giving the Scotland international an even louder ovation.

Jack isn’t just an important player, he’s obviously a popular one too, you can see that from training videos and from the post title celebrations in May – he bleeds red, white and blue – and team-mates will know what he has gone through to get back on the park.

The fans were equally as delighted to see Jack return to action but on seeing Hagi orchestrate an already buoyant support, it only further enamoured him to an adoring support.

Did anyone else notice Hagi giving it to the crowd to the noise up just as Jack was about to come on. We don’t see the other side of it, but Jack must be so respected within the dressing room for a team mate to be doing that.

The whole stadium seemed delighted to see Jack back today but I think nobody more so than Hagi. He was loving it 🙌🏻

Anyone clock Hagi when Jack was coming on 🥺

Hagi bigging up the crowd to cheer louder for Jack coming on, aw a love that🇬🇧

Hagi trying to lift the crowd for Jack coming on 🥺🥺

Even at 22-years old, Hagi is a leader, the small gesture that he made would have meant the world to Jack, who would have been understandably nervous about his first competitive game for nine months, you can’t help but love the Romanian international and how quickly he has embraced everything it takes to be a Ranger.