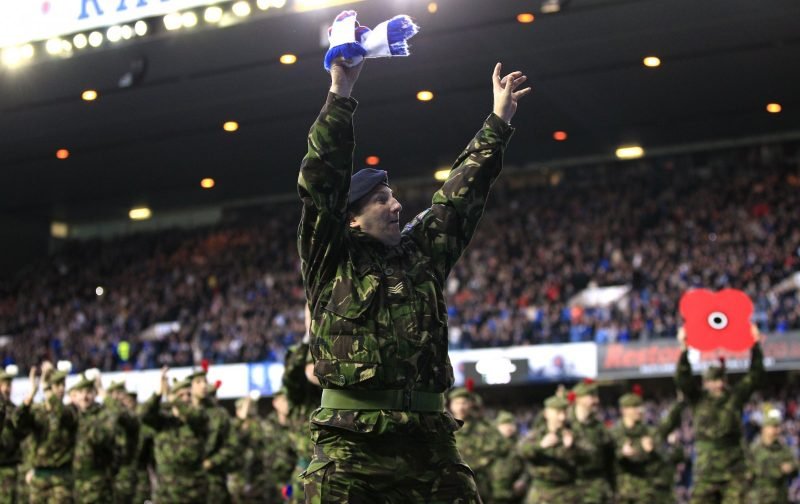 The Rangers Supporters Erskine Appeal, today confirmed that it has reached a very special landmark as it celebrated breaking the £1 million barrier in its fundraising for Scotland’s main veterans charity.

Launched in 2007, RSEA has sold pin badges annually, as well as other ventures such as branded merchandise, matchday collections, sponsored challenges and golf events to name but a few.

All down to the #RangersFamily

We are the people 💙💜https://t.co/dPVNfHPCnk

The Glasgow Times quoted a beaming Tom Clark as saying, “To reach over £1,000,000 for the Erskine Veterans has been a labour of love and I am delighted we have now passed this milestone.

“To every single person who has donated a pound or given an hour of their time, thank you. Without them, we wouldn’t exist or have achieved what we have. Massive gratitude and thanks also goes to our Honorary President, the late Harold Davis, and his wife Vi.”

“Our gratitude extends to our Patrons, alongside the countless organisations who have supported the RSEA over the years, of which there would be far too many to mention individually.”

“Everyone at Erskine is enormously grateful to the Rangers Supporters Erskine Appeal for their innovation, energy and resolve in exceeding this target and their generosity over the years, has made a world of difference to the lives of Scotland’s wartime heroes.”

“The hard work of the Rangers Supporters Erskine Appeal is one of a kind and it showcases the impact that a group of like-minded people can have on the lives of others.”

“The fundraising efforts of everyone involved at the RSEA continues to transform the lives of those under Erskine’s care.”

“For that, we are indebted to each and every supporter who has donated to the cause over the past 13 years, and to them we say a heartfelt thank you.”

In what started out 14 years ago as a worthy and admirable venture, few would have predicted the scale to which this campaign has grown. The lengths of the fundrasing and tireless work involved is incredible, this is a massive achievement for all involved with RSEA.