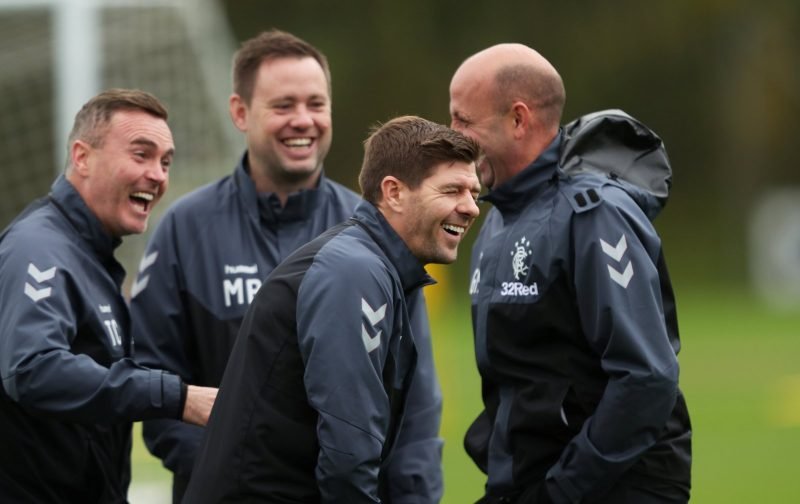 After a ten year wait, Rangers fans have been making the most of winning the Scottish Premiership title and in particular, lording it up over the other half of the Old Firm, before it was even official.

Now though, things have been ramped up a notch with kerb stones being turned red, white and blue, posters magically appearing at bus stops and Union flags being displayed all over the country.

The lead up to Sunday’s Old Firm saw some entertaining images on social media, none more so than the sight of London Road’s lamp posts being decorated all the way to Parkhead with Union flags prompting one of the most symbolic images of the season and an absolute treat for those that are gifted in the ways of Photoshop.

Where once they used ladders to see if they could “see them coming”, now they use them in a vain attempt to salvage their pride, much to the hilarity of Rangers Twitter.

Lovely gesture this – Union flags put up by our opponents welcoming the champions ✊ pic.twitter.com/GwFlP9F3lr

This picture
This picture right here
Is the greatest picture to be ever seen on the internet 😂😂😂😂😂😂😂😂😂😂 pic.twitter.com/zlxWT9otYx

celtic efforts this season … this ladder is about 20 points / rungs to short #RangersFC pic.twitter.com/zd394RYyNX

Celtic fans frantically climbing ladders to take flags down, Alfredo scoring his first old firm goal, and Rangers remaining unbeaten in the league. Not the best performance, but all in all, not a bad day. 🔴⚪🔵 🐃 pic.twitter.com/MJxqkcMxps

If ever a picture summed up the difference between the fortunes of two clubs….