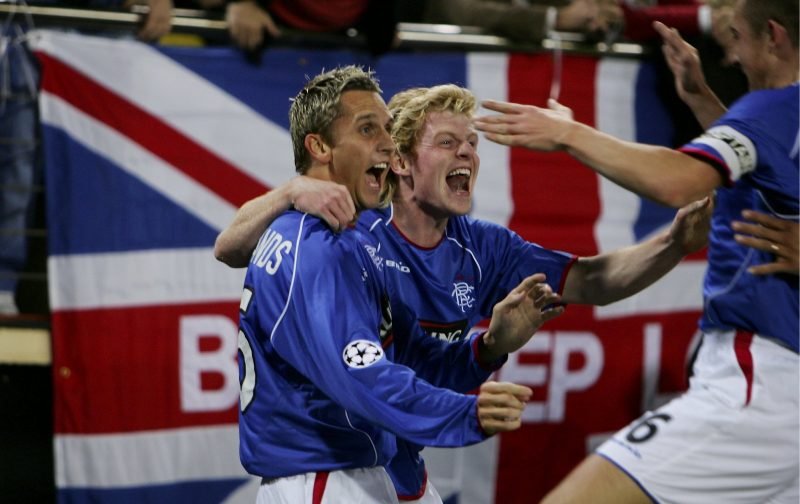 The last five weeks really have been an absolute joy for Rangers fans, with many beginning celebrations a lot earlier than the official crowning moment after Celtic failed to beat Dundee United in early March.

It’s safe to say that the green and grey hordes really have struggled to deal with the reality that is Steven Gerrard’s side being the best in the country and even their current manager reckons that the 20-point gap is not enough to prove that this is the case.

One man who really hasn’t taken it well is Alan Thompson, Neil Lennon’s former trusted assistant who left Parkhead under a cloud and who, as a player, rarely managed to accept defeat in Old Firm derbies without throwing his toys out.

Now, some 17 years later, Thompson has – bizarrely – taken to Twitter to vent his fury at Peter Lovenkrands, holding him personally responsible for getting him sent off rather than addressing the fact that he shouldn’t have stuck his head into the Rangers forward’s face.

Obviously, on the crest of a wave, Gers fans piled the misery on Thompson, taking great delight in his ongoing suffering…

Who cheated you to make you miss your penalty at kilmarnock?

Think about how you felt watching us win the league when Dunfermline May down at Ibrox. It matters 🥳

Mind when yir pal wee Lenny done the exact same thing against Juanjo of Inverness, now he is a coward, he also falls down holding his face when a coin lands on his padded jacket. 😂😂, get down to Newcastle pronto Alan, the pubs are open.🍻🍻🍻🍻🍻

Good to see Helicopter Sunday has turned you into a mad ranting weirdo mate. You’ve even tagged in Ally 😂

Oh dear, it’s one thing to moan about refereeing decisions but 17 years later and when you were in the wrong, that’s the worst conspiracy ever and there has been plenty coming out of the east end of Glasgow over the years.