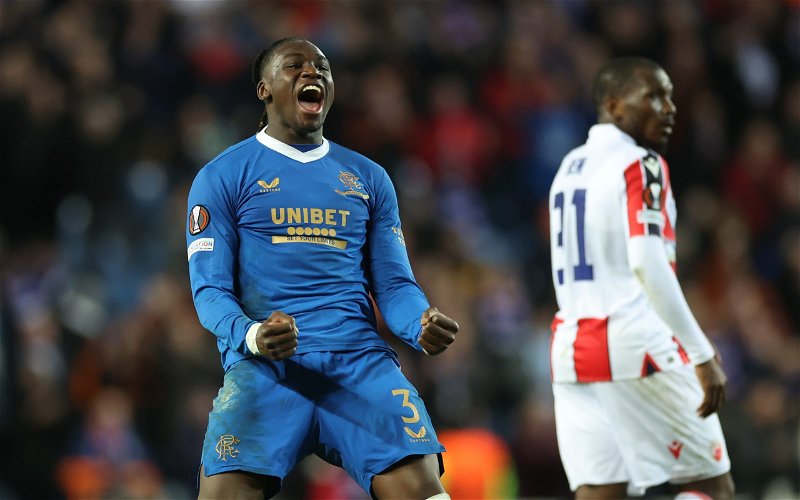 Getting to the final of a major European tournament is always going to draw attention, that three of our players were named in the official team of the tournament by UEFA’s technical committee further illustrating just how good we were on a remarkable run.

One player who will be subject to speculation throughout the summer will be Calvin Bassey, a player who has gone from strength to strength under Giovanni van Bronckhorst’s coaching.

The Europa League final man of the match was a key reason for us getting as far as we did, his aggression, pace and athleticism making him a perfect fit for defending against a higher technical level of opponent rather than the long ball merchants we face most weeks in the Scottish Premiership.

The normally reliable The 4th Official blog has claimed that there is already significant interest in the Nigerian international, signed for a nominal development fee from Leicester City just a couple of seasons ago:

“I have been told by several reliable sources that several Premier League clubs including West Ham United are interested in the services of Calvin Bassey.

“The defender is under contract until 2024 so it is going to take an obscene amount of money to tempt Rangers.

“The player caught the eye of the world with his performances but the interest from West Ham United in the left back turned centre half was there from before the Europa League final.”

Vital Rangers has made it’s feelings clear on Bassey for some time, he genuinely could be our first £20million transfer given his current status and the potential he has to become even better, not only that, but his adaptability in defence would make him a manager’s dream.

The benchmark has been set with Nathan Patterson, a fee that could rise to £16m, Bassey is already more mature and more experienced, he’s also more important to the team and the manager. With two years still to run on his contract we are also well protected in terms of his value depreciating.

Everybody knows how much money is in the Premier League, Man Utd signed Aaron Wan-Bissaka for £45m plus add ons, then there is Kieran Tierney who went for £25m with a lengthy injury history behind him, if the report is accurate and there are several clubs interested, it might not just be a club record fee needed to tempt him away from Ibrox.