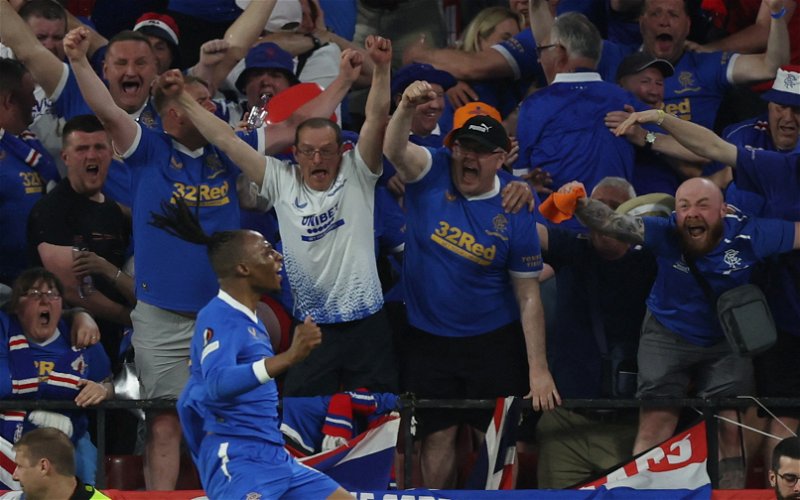 The potential of Joe Aribo’s departure from Ibrox came into question tonight following a tweet from Heart and Hand podcast.

Without being prompted, the official media partner of the club sounded an analysis of the scenario if the Nigeria international was to leave.

It reads very much like a preemptive warning on a sale and if that’s the case, expect further developments to escalate very soon.

Joe Aribo came for a song, contributed a lot in his time here and we’ll make a big profit on him.

Last stage of that is to re-invest the cash and then it’s the model we want.

As expected, the comment resulted in several responses with H&H offering further upon mention of Crystal Palace:

After three seasons at Ibrox, the 25-year old is now into the final year of his contract.

His personal ambitions may lie in the Premier League and who could blame him? For a Bosman deal, Aribo and Rangers has been a mutually beneficial relationship. Even more so if that ends with the club profiting to the tune of several million pounds.

If he has indicated that a new contract is not desired and indeed if he has his heart set on a return south, then a sale is the right decision at the right time. It is important that the much discussed player trading model is maximised and that will have different meanings for different players, as well as collectively across the squad.

Aston Villa were also previously mentioned as potential suitors and no doubt Steven Gerrard will be keeping an eye on the situation regarding a talented player. If such a move comes to fruition, Aribo will need to find a sustained level of consistency which hasn’t been present over the last couple of seasons.

It is because the Rangers supporters and other observers know just how good he is, that his play or lack of impact can be frustrating. When on it, he is devastating with much of his best in a blue shirt coming on the European stage.

With that goal in Seville, he could possibly have made his final impact on that high watermark.