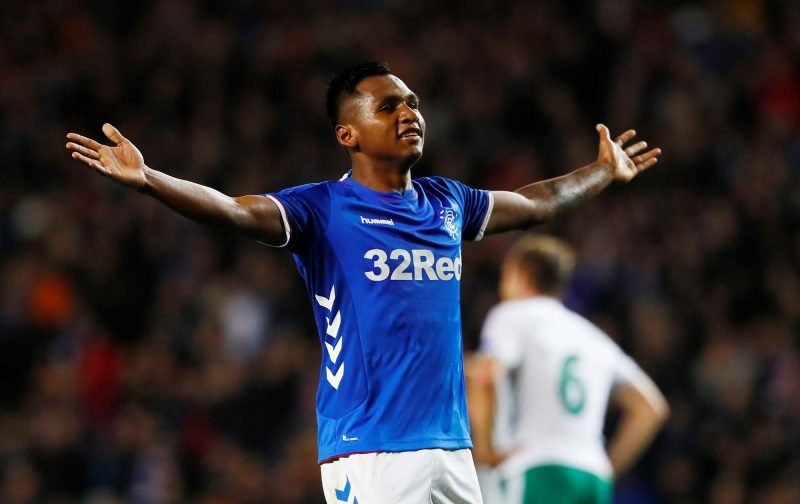 Rangers striker Alfredo Morelos has spoken about his future this week, admitting that while he has ambitions of playing in a bigger league his focus is on Rangers, as reported by The Scottish Sun.

Having scored 29 goals this season there aren’t many more exciting players in the Rangers squad nor the Scottish Premiership right now.

The Colombian, when on top form, is breathtaking to watch and it’s no surprise to hear that multiple clubs are keeping tabs on him ahead of a possible move away from Ibrox.

The 22-year-old has been open about his long-term ambitions and again this week has stated his desire to one day leave the Gers.

As quoted by The Scottish Sun, Morelos said:

There is a lot of speculation about my possible departure, but there is nothing concrete yet.

I know that there are many interested clubs asking and as soon as there is something official I will be announcing it.

But I’m committed to Rangers just now. I’ve had a good season and many clubs are interested and hopefully everything will be done in the right way.

I dream of playing in a much better, more competitive league. I look at the English Premier League and the Spanish League. The leagues in France and Italy are very big leagues too and very competitive.

But I am very happy with what has been a great season with Rangers. I’ve scored a lot of goals and on Sunday I hope to end the season with another goal and be the top scorer in Scotland.

With the player signing a new contract in March, we hold all the cards when it comes to his departure. His deal doesn’t expire until the summer of 2023 meaning we can expect a very good fee for him if he does go in the next couple of years.

The priority right now though is stopping Celtic winning anymore trophies next season and to do that we will need to keep players like Morelos at the club. In many ways retaining our best talents will be just as important as recruitment over the next few months.

Hopefully we can keep the Colombian happy enough at the club for at least another season, despite his discipline issues.