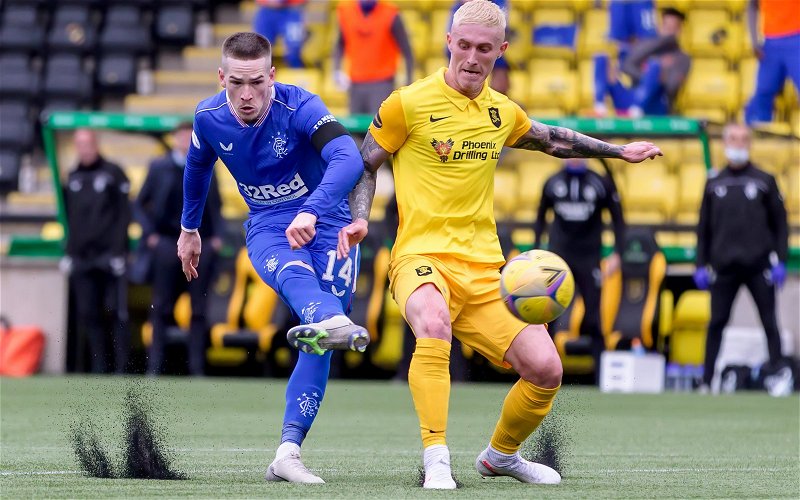 There is a school of thought that if Ryan Kent is not in full flow then Rangers are not at their fluid, attacking best – it is a valid one.

Against Lyon, Kent was caught in possession for both of the visitor’s goals and a miserable night was compounded when he limped off the pitch after pulling up with a hamstring problem.

The most important thing is that hopefully the injury is not a serious one and that Kent can be available for selection within a few weeks.

An obvious musing is that the Englishman has been struggling of late, it is simply not happening for him on the pitch.

No swagger, too little confidence and subsequently, not much end product.

A loss of form is to be expected to an extent, but how does the talented, former Liverpool player recapture his form?

Some have suggested that he has been playing with a niggle and not fully fit but that is conjecture – it is very unlikely that Steven Gerrard would short change his player and the rest of the team by needlessly playing him and risking further issues.

One thing is that Kent does not hide, he is a brave player and will keep going, even if he is not at his productive best as has been the case lately.

Against Lyon, there were several moments when the Salford-born man dithered in possession or didn’t see the early pass to spring attacks, it has been the same for his own output.

The explosive, direct player has been more ponderous and awkward so far this term.

Ryan Kent is a quality player with a skillset unmatched in the Ibrox dressing room.

With this enforced downtime due to injury, he can rest body and mind, re-focus and effectively start from scratch in his quest to find form.

Following a scan, the full prognosis will soon be confirmed but in a matter of weeks, he will likely be back on the training pitch and knocking on the manager’s door.

He will return and Kent will tear them apart, again.