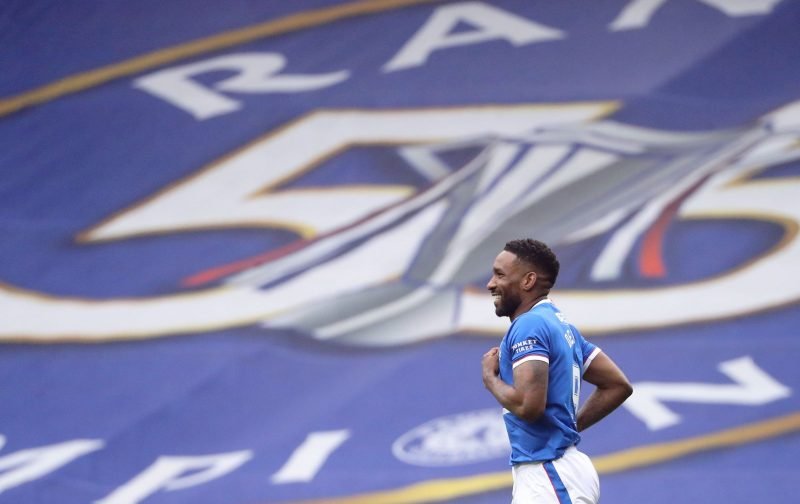 That is what this goal was.

From the inch perfect lofted pass from James Tavernier to the ice-cool first time finish on the left instep from Jermain Defoe.

It was made even better as it claimed the accolade of the 300th career goal for the England international.

In a distinguished Premier League career, as well as international honours for England and a spell in Canada, JD has seen it all.

With his fresh deal at Ibrox confirmed, there should be another few special moments left to savour.

He certainly enjoyed that goal in October against Livingston, as told to Sky Sports:

“It was just one of those moments. If you look at my celebration, it wasn’t that I was shocked, I was just so delighted it came off.”

“I remember speaking with Tav (James Tavernier) because I know his range of passing is unbelievable, and I tried it against Motherwell – the same pass from him, I volleyed it and the goalkeeper made a great save.”

“I said to Tav earlier in the week, Just look out for my movement…if I exaggerate my movement when I come short, I am going to spin in behind where I’ve got that space.”

“We literally got it off to a tee! The ball was so inviting. As it came over my shoulder, I knew I had to hit first time, but I had to be relaxed with the finish.”

“I didn’t want to snatch at it and when I made contact, I just knew it was going in. When I watched it back, it felt like it was in slow motion. I didn’t break stride and I was so happy, delighted.”

Textbook Defoe – anticipation, technique and application – this is a goal to be enjoyed again and again!