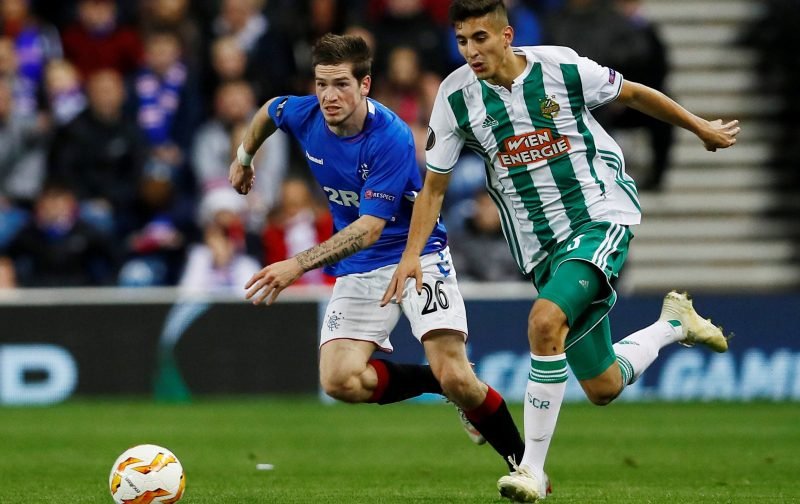 Rangers fans are desperate to see the club make a move for on-loan winger Ryan Kent, after Director of Football Mark Allen confirmed that we’re interested in discussing his future with parent side Liverpool.

Kent has been one of the signing success stories of the season, electrifying fans with his dynamic wing play and chipping with three goals and three assists.

His overall work rate and performances have been exceptional, with many feeling behind Alfredo Morelos and Allan McGregor, there is not another better performer in the first-team.

He’s had his injury issues but is set to find consistency again after the winter break and supporters are hoping to see us show ambition and agree some sort of deal that would allow the club to sign him permanently.

Whether that’s possible remains to be seen but Allen’s comments have had fans debating the possibility on social media, with these die hards taking to Twitter to share their thoughts on it all this week…

If there’s even a sniff of getting Ryan Kent permanently, I’d hope we’d be all over it. Get it done Gers! pic.twitter.com/FI3sA24r6K

If we get Kent on a full time contract this would go down as one of the most successful transfer windows ever. We have signed genuine quality and the club are moving forward again

This would be a brilliant bit of business and would top off what has been the best January window in years!! Tonto squared if this happens!

Not many players have his ability, pace and work rate. Now a key player for us. I have 2 children we could sell if additional funds are needed.

100% has to happen he loves the gers and wants to stay! Could be a key player for years to come

It would be a great signing get it done ????

Next to Morelos he’s probably my favourite player, stick a clause in with either a %sell on fee and or a buy back clause. Hopefully that would be enough ????⚪️????