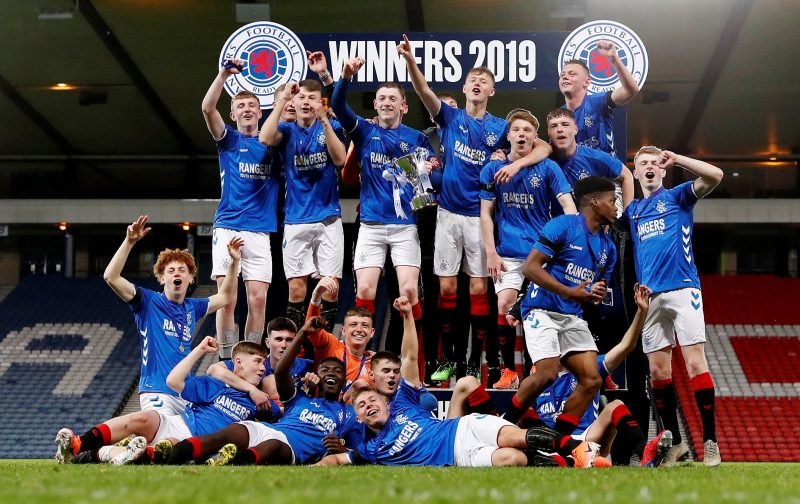 Kai Kennedy has made back page headlines recently with the news that his Rangers career appears to be over after talks with the club over a new contract broke down.

Speaking to Football Insider, former Ger, Alan Hutton has urged the 18-year old to be patient insisting that his time will come if he makes the grade.

When asked by Football Insider if he felt that the news was a blow to Rangers, he said:

“Oh 100 per cent, even me reading it it was a bit of a blow because we expected a lot from him, we had high expectations of him breaking into the team.

“It can be a little bit annoying when you hear of reasons like that. If it’s because the player is of a certain level then okay, no problem, that’s fine but when it’s to do with money issues, at the end of the day you’re 18-years-old.

“You’ve not broken into the first team really, you’re just on the cusp of it and for things to break down over wages, it’s a bit of a gut-wrencher. It’s a shame.

“It’s a shame for Rangers as a whole to miss out on a talented player over something that’s irrelevant at the moment. If you’re as good as you think you are and as the club think you are, you’ll get there eventually, just bide your time.”

He certainly has a point, Kennedy was – rightly – praised by Steven Gerrard last season and was promoted to the first-team squad, making one substitute appearance in the Scottish Cup and at that time it looked as though his future was bright at Ibrox.

There has always been plenty of high level interest in the diminutive playmaker and it was something of a coup for the club to get him to sign professional terms as a youngster in the first place.

After the recent 2-0 victory over Nice that sealed the Veolia Trophy, Gerrard was scathing in his assessment of some of the academy prospects that hadn’t made the trip to France – Kennedy’s demotion to the “B” team is a sure sign that all is not well between the two.

Kennedy is far from the finished article and if he was to sign a new contract would probably be sent out on loan to get some much needed game time at senior level, for a player that has made such a limited impact on the first team to be demanding the wages of an established professional is only ever going to end with one outcome.