Hutton, speaking to Football Insider, gave his thoughts on Taylor’s situation as his club revealed this week that they will listen to offers and have withdrawn a contract offer for the forward.

When asked if he thought that Rangers should make their move for Taylor in this transfer window, he said:

“Well, I think it’s time. He’s said no to the contract so, in his mind, he is looking for a new team, but there will be a lot of people after him”.

“He’s a good player, he’s done really well for them, so I can’t imagine Rangers are the only ones in for him, so they’re going to have to act quickly”.

“We’ll obviously see in the coming weeks, we don’t know what will happen with Morelos in the future, possibly a summer move, so he’ll be looking to get someone in and get them into the way Rangers of thinking and the way Gerrard wants them to play”.

“So I rate him as a player, he’s a good player, so he could be a good fit for Rangers”.

Taylor has done well for Charlton over the last couple of seasons and because of his transfer status – available on a pre-contract or a small transfer fee now – there will be plenty of English clubs that will be keen to secure such a proven goalscorer.

Rangers do need a third striker, Alfredo Morelos and Jermain Defoe have both got good fitness records since they arrived at the club and haven’t missed many games (other than the occasional suspension), however, Morelos is unlikely to stay beyond the summer transfer window and Defoe is 37-years-old.

With Taylor being available on a pre-contract it would represent good business for the Ibrox club and Steven Gerrard, he is 29-years-old so there wouldn’t be much money to be made off him at the end of a 3-year deal but if they can get him for free in the summer or at a significantly reduced cost now it would make sense.

Should Rangers attempt to sign Lyle Taylor in January or on a pre-contract agreement? 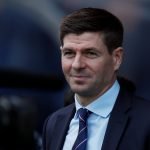 Taylor has experience of playing in Scotland with both Patrick Thistle and Falkirk so nothing would come as a surprise to him, he know how physical the league is and the conditions he would have to play in, he is also a big lad at 6ft 2 inches tall – something Rangers lack in their attack at the moment is height despite Morelos’ obvious physical presence.

With 138 goals and 53 assists in 377 career appearances, Taylor would represent excellent value for money but as Hutton says, they will need to move quickly if they want to land the in demand striker.