“Bring on the sheep”, red hot Rangers fire five past Hearts to close gap on Celtic

Rangers returned to domestic duty following the 2-2 mid-week draw with Feyenoord in the Europa League with a comprehensive 5-0 thumping of Hearts at Ibrox.

The Light Blues were under pressure to close the gap on city rivals Celtic after they had secured a 4-1 win away to Ross County earlier in the day.

Alfredo Morelos continued his sensational goal scoring form with his 25th Rangers goal of the season in 28 appearances, Ryan Kent continued his good form, scoring for the second weekend in a row and Greg Stewart came off the bench for a 15 minute cameo to remind Steven Gerrard that he has an uncanny knack of being in the right place at the right time.

Should Morelos be rested against Aberdeen? 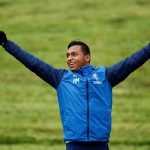 Gers fans took to Twitter to celebrate the result that leaves the Ibrox side just one goal behind Old Firm rivals Celtic heading into a big ten days for the club with Aberdeen, Celtic and Young Boys providing season defining fixtures.

Terrific result. Bring on the sheep.

Loved that today Rangers. Moment of the match for me was Goldson rallying the troops at the 4th goal, encouraging the team to keep going. Love that attitude, more of that on Wednesday 💪🏼

Great Performance after a tough game on Thursday night. Good to get a few important players off and rested. I’d be surprised if Davis plays at all on Wednesday.

Sometimes less is more when you are trying to get your point across.