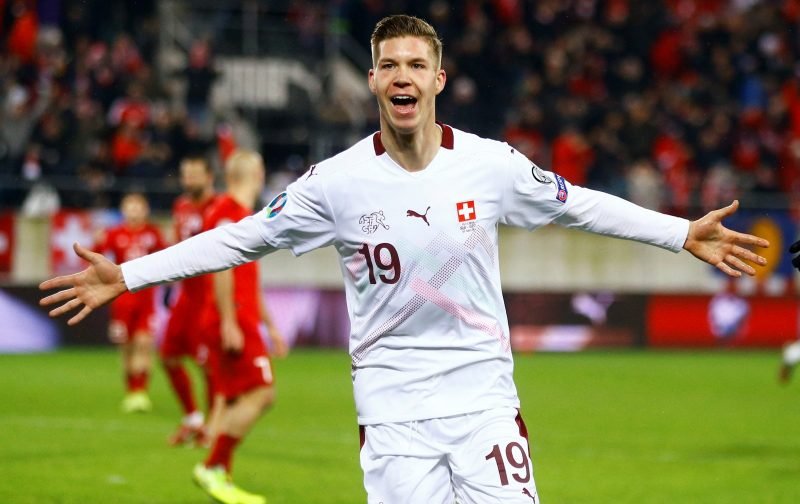 Former Rangers full-back Alan Hutton has strongly tipped Cedric Itten to grab a starting place on Saturday against Livingston in the Premiership opener.

Having scored three goals over the course of pre-season, the tall Swiss international striker has reminded Steven Gerrard of his qualities but former Spurs, Aston Villa and Real Mallorca man Hutton believes there is more to the upturn than just his displays on the pitch.

He was speaking to Football Insider, ahead of the start of the Scottish domestic season, this weekend.

Fashion Sakala started as the focal point of attack against Madrid on Sunday and his rapid pace could give him the nod, but Hutton made the case for Itten:

“I think it would be really harsh on him if he didn’t start – he has scored three goals now in the pre-season games. His finish (against Real Madrid) was outstanding.”

“It looked like a striker at the top of his game, in form. He didn’t even think about it – it was very difficult to take.”

“He’s taken it first time into the side netting and it was a fantastic finish.”

“I think we’re going to see the best of him this season.”

Hutton then reflected on last season, which was a mixed bag for the player signed from St Gallen:

“It was obviously difficult coming in (to Scotland), in a year with the pandemic, not being able to leave his house.”

“Now things have begun to open up again, he’s getting more familiar with his surroundings as well as getting out and about,  probably enjoying a better lifestyle at the moment”

“You can see that in his performances, he looks full of confidence.”

“I just think we’re going to see the best of him if given the opportunity and I think there is an opportunity at the moment.”

Whether that chance comes against Davie Martindale’s Livingston from the start remains to be seen, but over the next couple of weeks, Cedric Itten is a strong contender to play in some massive games for Rangers.